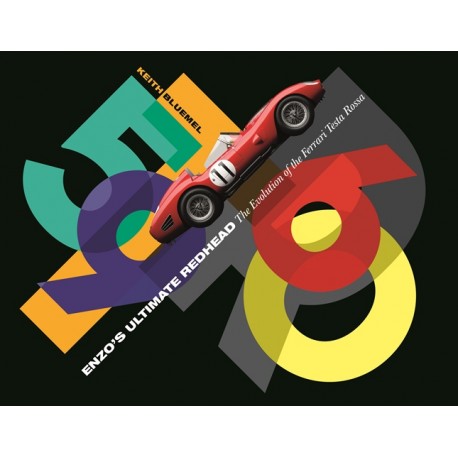 ENZO'S ULTIMATE REDHEAD : THE EVOLUTION OF THE FERRARI TESTA ROSSA

Written by Ferrari authority Keith Bluemel, it covers the development of the ‘TR’ from inception through to the 1959/1969 seasons, with the Le Mans victory in 1961. It slowly focuses on 0774, the car actual car that won Le Mans in 1961.

The 250 Testa Rossa heads the pack of Ferrari's greatest Icons. Perhaps only the 250 GTO can match its mystique. Its extremley rare, and the race-winning history, high performance and unique Aesthetics make it extremley special. This means the name Testa Rossa is immediately recognisable to Ferrari aficionados and race fans, and the wider public. It became a legend in its own racing lifetime and its one that has endured. Today it is among the most desirable and cherised collectors cars in the world.

It has been designed by Julian Balme and it is a high quality production with a slip case. The print run is limited to 1,000 copies.