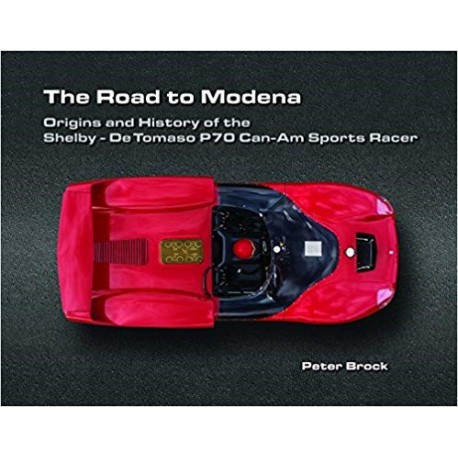 I am very pleased with my latest book (132 page soft cover book with pages sized at 8 ½” x 11”, filled with great stories and photos). It covers my years at Shelby American with a focus on the time I spent in Modena, Italy designing the Shelby – De Tomaso P70 for Carroll Shelby, a car planned for the emerging Can-Am series. Working in Modena was one of the best experiences of my life. I started to write the story of the history and creation of the 1964 Shelby – De Tomaso P70 when I realized I also had to describe what was happening with Carroll’s various projects, racing, and other cars I had designed at Shelby American (e.g. Lang Cooper, Nethercutt Mirage), to place the P70 car in context. Consequently in this book I share the transition from the Cobra’s first appearance in ‘62 to its championship in ’63, through to the King Cobra USRRC race period to the transition to Can-Am. Shelby had his fingers in a lot of pies. Every move was well thought out and intentional, all with the ultimate goal of getting Ford’s lucrative GT40 program but having contingency plans in case it didn’t happen. Shelby’s venture with Alejandro de Tomaso was one of those contingencies. Looking back, these few short years turned out to be one of the most interesting and innovative in sports racer history. The quest to understand and harness air flow and ground effects led to amazing creativity and a race series that showcased it all to the world, the Can-Am. My designs during this period at Shelby’s included the FIA World GT Champion Daytona Cobra Coupe, the Shelby GT350 Mustang, the Lang Cooper, the Nethercutt Mirage, Shelby’s Can-Am spec racer and ultimately the Shelby – De Tomaso P70. My time in Italy working on the P70 created some of my most enjoyable memories. In this book I share my experiences during this amazingly creative era and share the story of the people and events that led to the creation of the P70. Enjoy! Peter Brock