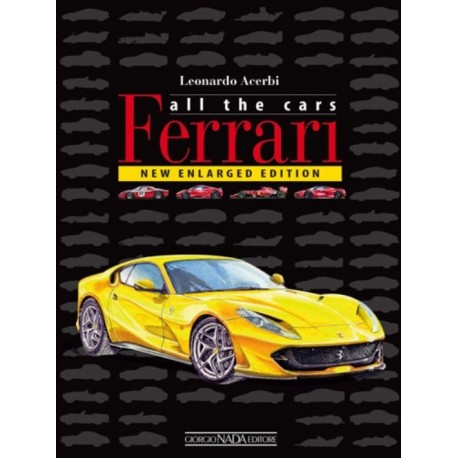 FERRARI ALL THE CARS

The first and only “virtual gallery” with all or almost all the models produced by the Maranello firm from 1947 to the present day, drawn by an artist of the calibre of Giorgio Alisi. Detailed technical files and texts by Leonardo Acerbi, an established historian of the marque, complete this unique overview of the Prancing Horse and its history.
First published in the mid-2000s and reprinted on a number of occasions, Ferrari All the cars reviews, model by model, all the most significant cars produced by the Maranello firm from 1947 to the present day. From the Auto Avio Costruzioni of 1940, the Ferrari precursor, to the 125 S, the first car to carry the Prancing Horse badge and the Ferrari name, through to the latest Portofino, the reader explores unforgettable icons of automotive history. Among them, to mention but a few, are models such as the 250 GTs, the Testa Rossa, the 250 GTO, the 250 Le Mans and the 275 GTB, through to the latest creations – 812 Superfast, Portofino GTC4 Lusso e Monza SP1/SP2 –by way of the 365 GTB/4 “Daytona”, the 512 BB, the 308 GTB and many others. Then, naturally, there are all the F1 single-seaters from 1950 to the present day, those that have permitted the Prancing Horse to win 15 World Driver’s Championships and 16 Constructors’ titles, and the unforgettable Sports cars and Prototypes, undisputed protagonists for years in the enthralling endurance classics such as the Le Mans 24 Hours and the Targa Florio. The files on each model are complemented by an accompanying image, brief but pertinent contextual texts and detailed technical specifications. Ferrari All the cars is a unique book allowing you to have a complete history of Ferrari and its unforgettable cars always to hand, an authentic vademecum of the Maranello firm. This new edition of the book has also been enriched with a series of files devoted to the unforgettable concept cars created by Pininfarina around Ferrari mechanicals. Iconic models such as the 365 P Speciale, the 250 P5, the P6, the 512 S and the Modulo, through to the Sergio, cars imbued with styling motifs that in many cases were to be transferred to the production models.