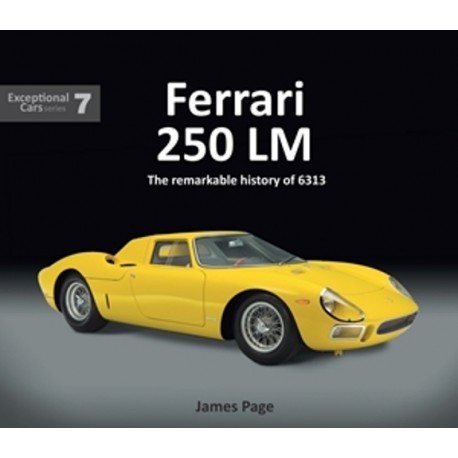 The Ferrari 250 LM was born of controversy. Enzo Ferrari wanted this compact mid-engined coupe to qualify as a GT car for world championship racing. The FIA, motor sport’s rule-makers, disagreed and this new model, of which just 32 were made, was forced to run as a sports-prototype in 1964 and 1965. To everyone’s surprise, the LM was to dominate the Le Mans 24 Hour race in 1965. 6313, entered by Ecurie Francorchamps, led for much of the race and finished second after a tyre failure in the closing stages. It was the high-spot of a busy season for a car that, 54 years later, is well-known as a successful contender in historic car racing.

Author James Page covers the genesis of the 250 LM and its development, its technical details and specification, and the ongoing row about its homologation as a GT car. 6313 was driven at Le Mans in 1965 by Pierre Dumay and Gustave Gosselin, and led the race through Saturday night and Sunday morning, only to suffer a tyre blow-out with less than three hours to the finish, allowing the NART 250 LM of Jochen Rindt and Masten Gregory to take victory. For many years the identity of 6313 was confused with its team-mate 6023. Detective work by Ferrari specialist Keith Bluemel, consultant on this book, clarified the situation. This book unravels the mystery.

The book is profusely illustrated with period photographs and documents, and a gallery of studio photographs of the car as it is today.