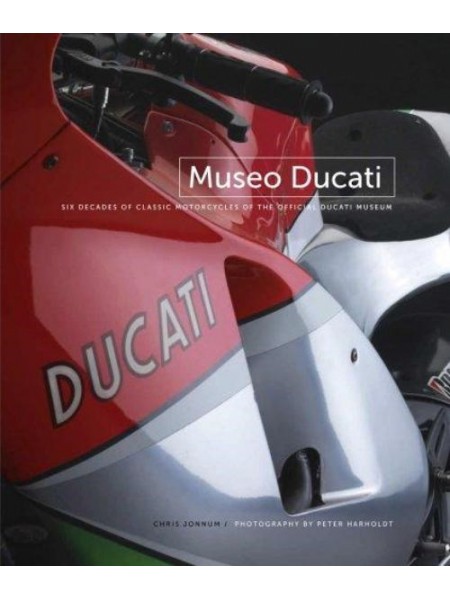 Ducati's official museum celebrates the racing heritage that's driven the company for more than half a century. In Museo Ducati, Chris Jonnum and Peter Harholdt profile the greatest motorcycles displayed there. The tour begins with a 1947 Cucciolo motorized bicycle and ends with the 2010 Desmosedici GP10 ridden by 2006 MotoGP champion Nicky Hayden. Other highlights include the 900 Super Sport prepared for Mike Hailwood's 1978 win at the Isle of Man TT, and the 1990 851 that Raymond Roche rode to Ducati's first World Superbike championship. The bikes are shown in stunning detail through photographs that reveal their overall design as well as details of engines and other components. And the vivid text explains each model's technical features along with its performance on the track.

For ducatisti, visiting the Italian motorcycle manufacturer's museum in Bologna is like coming home. Every year a steady stream of Ducati owners, aspirants, and enthusiasts arrive like pilgrims to absorb the spirit of competition that has made Ducati a legendary name. Museo Ducati captures the Ducati Museum experience through brilliant photographs taken in a custom on-site studio. The images and text capture the sweep of Ducati's racing history through profiles of the most important motorcycles in the museum, from the earliest postwar entrants to contemporary MotoGP winners. In between are bikes ridden by champions Paul Smart, Bruno Spaggiari, Mike Hailwood, Raymond Roche, Carl Fogarty, Troy Bayliss, and many others.