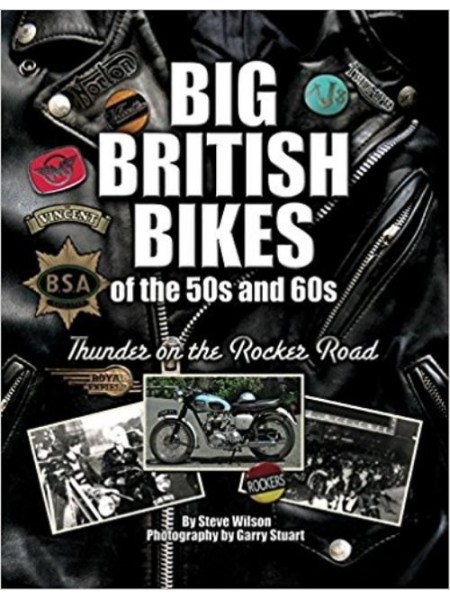 In the 1950s and '60s the British motorcycle industry was at its postwar peak, with its large-capacity high-performance bikes in strong demand all over the world. AJS/Matchless, BSA, Norton, Royal Enfield and Triumph were all making 100mph-plus big twins, with the king of them all, at least into the 1950s, being the mighty1000cc Vincents, while among the ton-up singles were the BSA Gold Star and the Velocette Venom and Thruxton. In this book veteran motorcycle writer Steve Wilson reviews the top-of-the-line bikes of all these manufacturers, first giving an introduction to the motorcycling scene in the period, with a particular look at the emergence of the Rockers, the black-leather too-fast-to-live-too-young-to-die bikers who developed a culture all their own, inspired indirectly by Marlon Brando behaving badly on his Triumph Thunderbird in the banned-in-Britain 1953 movie The Wild One. Then the motorcycle makers are dealt with alphabetically, with their big bikes described in detail and their performance, handling, strengths and weaknesses discussed. In addition to a wide selection of archive photographs, specially commissioned colour photography features examples of the outstanding bikes of the period: AMC/Matchless CSR 650 twins and their Norton Atlas-engined 'Hybrid' siblings, BSA A7SS 500, Gold Star singles, AIO Super Rocket and Rocket Gold Star 650 twins, Norton SS 500/600/650 twins, Velocette Venom and Thruxton 500, Royal Enfield Constellation 700 twin, Triumph pre-unit 500 and 650 twins and unit Bonneville 650, and finally the Vincent 1000 vee-twin.