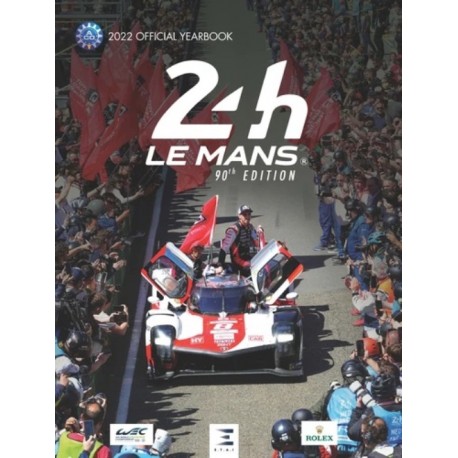 Already available in the bookshop and on our website

First of all, the 90th edition of the 24 Hours of Le Mans was marked by a massive return of spectators after two years of restrictions. The public was rawaeded for its patience by an action-packed race with, in particuliar, a no-holds-barred duel between the Toyota GR010 Hybrids. After no.7 in 2021, no.8 had the honor of offering the Japanese manufacturer its fifth outright victory in the Sarthe. Ryo Hirakawa clinched his first win on his first appearance while it was Brendon Hartley's third and above all, Sébastien Buemi's fourth, who joined a select club consisting of the great Henri Pescarolo, Olivier Gendebien and Yannick Dalmas. The other major exploit of this year's race is down to Jim Glickenhaus. The whimsical American finished fourth last year on his first outing in the Le Mans classic and  this year he scored that podium finich he's dreamed of for so long !

And let's congratulate Jota on its extraordinary performance in LMP2 in what was essentially an incredibly competitive single-make category as the English team's two cars finished on the podium. The works Porsche 911 RSR-19 driven by frédéric Makowiecki-Richard Lietz-Gianmaria Bruni will go down in the history books as the last winner of the GTE Pro category much adored by the fans, but which was having its swansong in the 2022 24 Hours of Le Mans. And the TF Sport Aston Martin managed to overcome a tenacious challenge from porsche to win the GTE Am category.

You'll find all these stories and much more in this annual told through hundreds of specially selectd photos. In addition, it contains all you want to know about the entries, regulations and the secrets of the 2022 edition of the 24 Hours of Le Mans.