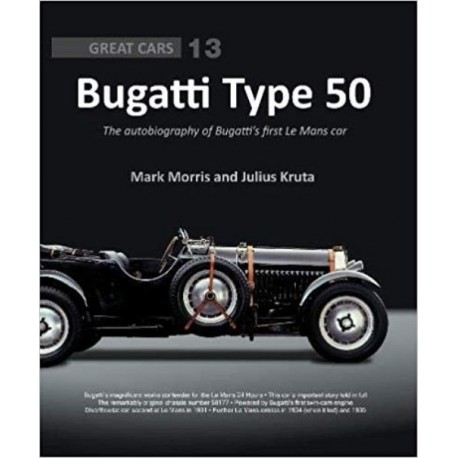 Launched in 1930, the Bugatti Type 50 heralded a new era with the introduction of the Molsheim marque’s first twin-cam design, a supercharged 4.9-litre straight-eight engine of prodigious power. At a time when brute force was needed to win the Le Mans 24 Hours, a competition version was developed and three such Type 50s took part in 1931. The car around which this book is focused, 50177, was leading the famous endurance race when the team withdrew it owing to tyre failures that had afflicted the sister cars, causing one to crash heavily at high speed.

The fascinating story of 50177, and the Type 50 in general, is told in this brilliantly researched and superbly illustrated book in the Great Cars series. Introductory chapters explain the economically perilous world of 1931, the genius of Ettore and Jean Bugatti, the bloodline of large-capacity Bugatti engines, and the Type 46 from which the Type 50 was derived. There follows an in-depth exploration of the Type 50’s design and development, including the Miller inspiration behind its twin-cam engine.

The four Le Mans races in which Type 50s took part form the core of the book and tell a story of promise unfulfilled. The subject car, 50177, raced three times, in 1931 as a works entry with race no. 5 (driven by Albert Divo and Guy Bouriat) and in 1934 and 1935 with works assistance as no. 2 (driven by Pierre Veyron and Roger Labric). A section about the drivers presents illustrated biographies of the four men who raced 50177 as well as the four others in the 1931 works team — Louis Chiron and Achille Varzi in no. 4 and Maurice Rost and Count Caberto Conelli in no. 6. Post-war, three-time Le Mans winner Luigi Chinetti bought 50177 in 1949 and took it to America, where it spent nearly 50 years with five different owners. The last of them was Miles Coverdale, a passionate Bugatti collector who kept the car for 23 years and uncovered much of its history through correspondence with former works mechanics, notably Robert Aumaître.