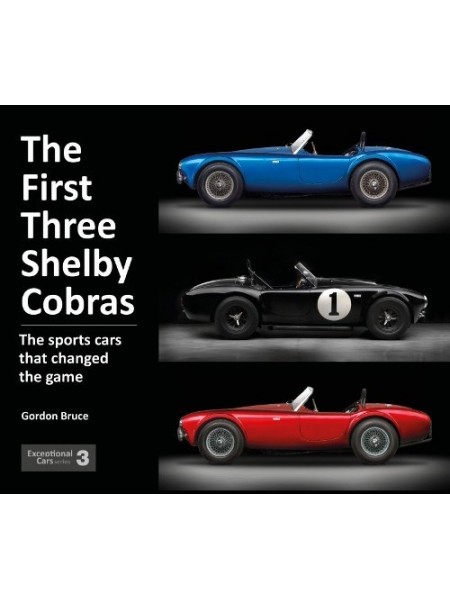 THE FIRST THREE SHELBY COBRAS : THE SPORTS CARS THAT CHANGED THE GAME

This book, the third in the Exceptional Cars series, tells the story of three cars, the first AC Cobras created by the legendary Carroll Shelby in 1962. The prototype CSX2000 has been described as ‘the most important modern American car’, although it was built on a British AC Ace chassis with an American Ford V8 engine. CSX2001 was the first production Cobra and CSX2002 the first to race, leading to a series of competition successes that made Shelby’s Cobras famous and a favourite of sports-car enthusiasts throughout the world.

• CSX2000 was the only prototype Cobra and was retained by the Shelby family until 2016, when it sold at auction for a record $13.75 million.

• The first production car, CSX2001, was delivered to American race driver Ed Hugus, and subsequently sold to a Frenchman, Jean-Marie Vincent, who raced in the Tour de France and numerous European hillclimbs.

• CSX2002 nearly won its inaugural race, at Riverside, driven by Bill Krause, but was side-lined by a broken rear hub. The first Cobra win, by this car, fell to Dave MacDonald at Tucson in March 1963.

• All three cars are now the pride of car collections in the United States. CSX2000 and CSX2002 are part of the Larry Miller Collection, while CSX2001 belongs to a California-based motorsport aficionado Bruce Meyer.

• The book is lavishly illustrated with a mix of period and contemporary images, many of which are previously unseen.