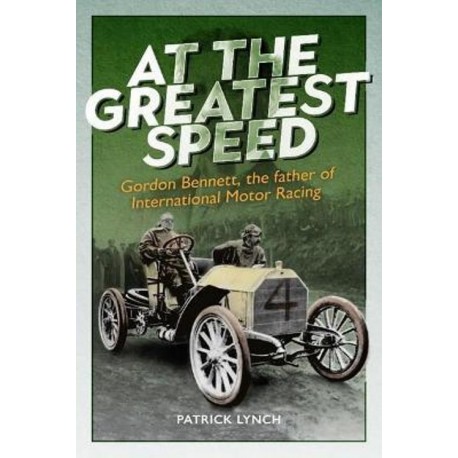 AT THE GREATEST SPEED - GORDON BENNETT

James Gordon Bennett was born in 1841, a spoilt only son who took over as publisher of the New York Herald from his millionaire father. Bennett tirelessly supported pioneering fields of technology and sport, always with speed in mind. In 1899, fascinated by the new motor cars, he instigated the International Gordon Bennett Cup. The inaugural race took place in 1900 between Paris and Lyon. Three countries entered, but this was just the beginning of a massive phenomenon that, thanks to Bennett, saw spectators grow from less than a hundred to eighty-thousand. The widespread anti-car sentiment, endless bureaucracy, speed limits, safety and design challenges were all obstacles to overcome.

Each Gordon Bennett Cup Race is documented here with an account of the drivers, the cars, the courses and the thrilling highs and lows of the events. The 1903 Cup, which was held in Ireland, was crucial since for the very first time a closed-circuit course was used. It was also the first international race in the British Isles. His dedicated promotion of early motor-car racing gave a boost to the global auto-industry and was a firm basis to the international racing that is still a thrilling part of our lives over 100 years later.