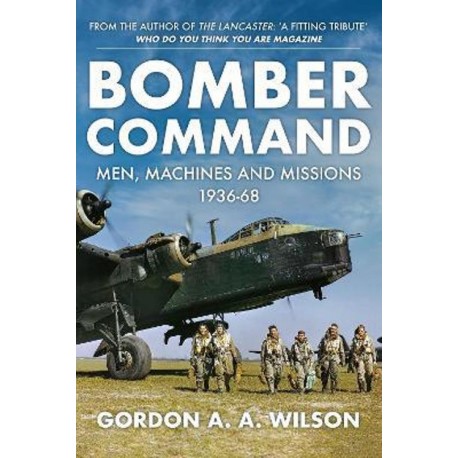 Bomber Command is a richly illustrated account of the Royal Air Force organisation from its inception prior to the Second World War in 1936 to its final years during the Cold War. The book covers the reasons for Bomber Command and the personnel that guided its formation and the philosophy and politics of the change from strategic bombing to area bombing, and the ensuing controversy. The Bomber Command organisation and how it functioned is traced, from Headquarters down to the various Groups and the many Squadrons. Famous and specialised Squadrons and the honours awarded to them are explored. Gordon Wilson does not neglect the social impact of this huge organisation: a bomber base had a large impact on the local economy and many lasting war-time bonds were established.

The operational aircraft that spearheaded the might of Bomber Command and brought the bombs to the enemy's shores included famous machines such as the Avro Lancaster, Handley Page Halifax and the unique fighter-bomber, the de Havilland Mosquito. The author analyses their construction and performance. Major target raids and the aircraft and Squadrons taking part are described. Some raids were ill conceived, others were brilliant in their execution.

The transition to the Cold War and nuclear deterrence naturally confronted Bomber Command with an entirely rewritten role and saw the introduction of a new generation of V-Force jet bombers.

Complemented with a range of images of memorials, famous personnel, stations, aircraft, aircraft engines, and manufacturer's factories, Bomber Command is a fitting tribute to 'The Many'.