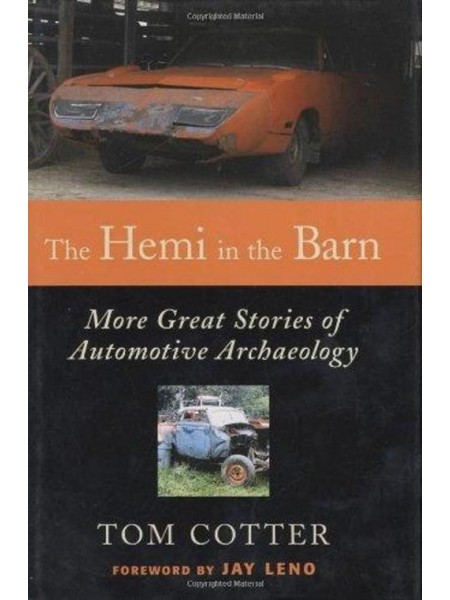 THE HEMI IN THE BARN

Reviews:
“Tom Cotter's sequel to last year's best-selling The Cobra in the Barn relays one great tale after another, with players unearthing rare cars to die for. The treasures include an armored Mercedes-Benz Aktion P command car discovered in pieces in Russia, a desirable Dodge Daytona Hemi virtually abandoned behind bushes in a guy's yard, a bushel of Bugattis in a barn, the ‘Divorcee Cobra,’ and a GTO owned by a mobster. These are great stories about great cars.” - Edmunds.com

“The book is highly entertaining, often exciting and should hold universal appeal for all car enthusiasts.” - Hemmings Muscle Machines

About the book:
It's every car lovers fantasy: the perfectly preserved classic automobile discovered under a blanket in some great-grannys garage. And as Tom Cotter showed us in The Cobra in the Barn, it's a fantasy that can come true. Cotters' adventures in automotive archaeology continue in The Hemi in the Barn, with more than forty new stories of amazing finds and automotive resurrections. Avid collectors big and small recall the thrills of the hunt, the tips and hunches followed, clues pursued, the heart-stopping payoff. There's the forgotten Duesenberg--the only unrestored one around--that Jay Leno found in a Burbank garage. There's another 1931 model Dusenberg Leno found in a parking garage in New York City that was parked in 1933 and was never moved. There's a Plymouth Superbird found buried in a hedge out of sight in Alabama. There's the rescue of the first 1955 Corvette ever built. There's the find of legendary race builder Smokey Yunick's Boss 302 Trans-Am car. And there's the story of the original Cobra Daytona Coupe built by Peter Brock and sold to Phil Spectre--a story that somehow involves a chauffeur's daughter setting herself and her rabbits on fire. As entertaining as these tales are--and some are truly corkers--they're also full of tantalizing hints and suggestions for readers setting off on their own adventures in automotive archaeology.