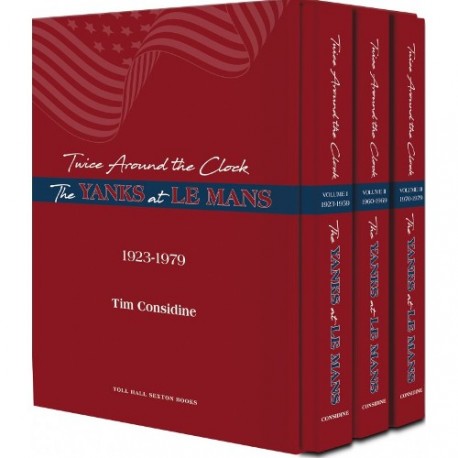 Research and interviews conducted for 26 years, written over the last six years. Photographs, many never before seen, from the great photographers over the ages, and personal pictures from the participants. Even those published before have never been seen as presented in Yanks, often with captions by the participants. Personal stories from hundreds of American drivers, owners, crewmembers, from the first American to drive at Le Mans in 1929, to the most recent competitors – some famous, some not – all heroes for competing in the world’s most important endurance race. It’s the personal stories that are the heart of Yanks and make it unique. They add humanity – and a fair bit of profanity – to history. Some quite surprising – the night before the 1966 race, the driver of America’s first overall winning car stood guard as a confederate broke into the Ford garage to make unauthorized adjustments. Some downright controversial – an American team member claims he relieved a famous Yank driver for several pre-dawn laps on the race winner that year, grounds for disqualification if discovered. Some poignant – one of America’s best pulled into the pits in tears after believing he’d just hit the dead body of his friend who’d crashed and been thrown back onto the track. And many just plain funny – a U.S. champion, unbeknown to anyone, blind in one eye, tells of his panic when the female medical examiner at Le Mans clapped a paddle over his good eye before he could read the chart. What to do? American ingenuity – he reached out and grasped the back of her leg. “Monsieur!” The paddle dropped just long enough for a glimpse. Complete results tables after each chapter, with American drivers, cars, engines and teams in bold to stand apart. Appendices American Drivers – listed alphabetically, with vital statistics, races entered, co-drivers, cars and results American Cars/Engines – listed alphabetically, with years entered, drivers and results.