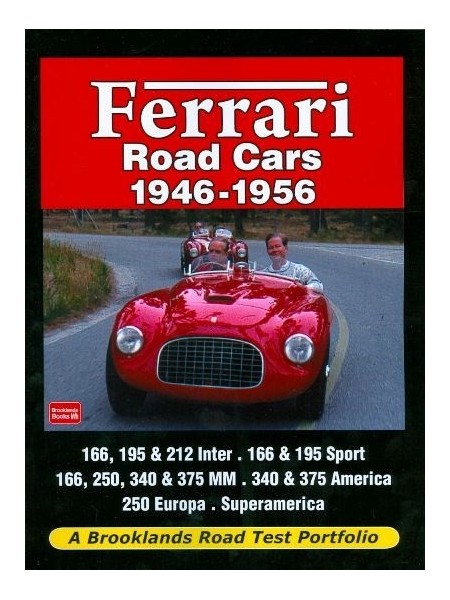 An in-depth reference book compiled from multiple sources, these incredibly focused portfolios contain a wealth of information for the collector, restorer or enthusiast. As much of the mystique of the Ferrari marque is associated with its racing successes, it is more usual for authors and publishers to document Ferrari's racing successes while the road-going automobiles are rarely given any consideration. However, the road cars constructed between 1946 and 1956 played a significant part in Ferrari's growth and development during those formative years and this portfolio traces the history of those iconic cars. Brooklands Books UK has dug into their archives and compiled a wonderful assembly of documentation for the early road cars. Road tests and track tests written by extremely knowledgeable authors, historians and drivers such as Phil Hill, Peter Coltrin, Warren Fitzgerald, John Bentley, Michael Bowler, Hans Tanner, and Dean Batchelor to name just a few and in no significant order! However, the demarcation between the race cars and the early road cars is often blurred, as many of the cars that were constructed during that era had dual personalities and many of the so-called road cars were nothing more than thinly disguised race cars. Therefore, while the intention of this book is to focus on the true road-going Ferraris manufactured from 1946 to 1966, the reader has to accept that there will be some gray areas. Brooklands Books Ltd. has been publishing road test portfolios on a wide range of automobiles and motorcycles since the early 1950's and the series now runs in excess of 500 titles. This book is part of the digitally produced series of portfolios and VelocePress is proud to be part of the publication effort in conjunction with Brooklands Books. Typically the contents include road tests, track tests, new model reviews, owner commentary, driving impressions, specifications, performance data, design and styling articles.