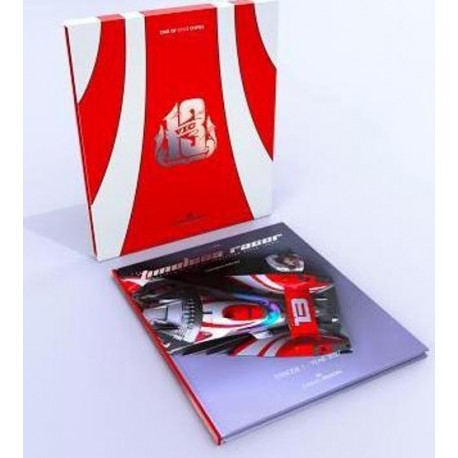 This Limited Edition comes with a unique cover and a pristine slipcase with metallic foil print. The print run is limited to world-wide 1113 copies. At a stunning size of 12"" x 14"" (30.5cm x 35.5cm), and with full spread images spanning 24"" in width, this first book of a new fiction series will open the doors to a parallel history of racing. Daniel Simon designed for Bugatti, Lotus, Formula 1 and penned unforgettable vehicles for Hollywood movies like Tron: Legacy or Oblivion. This is his second book after Cosmic Motors. Simon will present in this series over the next years fictitious racing machines at impeccable detail up to 50 megapixel, including vehicle specs and maps of the tracks they raced on. All vehicles and characters are explained through the carefully written story of racer Vic Cooper, who time-travels to the past and the future to compete in the most challenging motor races between 1916 and 2615. This is episode 1, the year 2027, written in English, French and German. Top Gear magazine says on the back cover: ' After Cosmic Motors and his adventures in Hollywood, this is Daniel Simon's next big coup. ' Design fans, car enthusiasts, CG addicts and science-fiction aficionados can enjoy Simon's parallel world through hyper-real renderings, drawings and photography of fictional drivers, managers and beautiful women. This first episode puts three uniquely designed race cars in the spotlight: The 1981 Masucci X-5, the 2027 Masucci X-7 and the 2027 Prideux -Martin MF/27. The foreword has been written by racing legend Jacky Ickx, who raced in the 1960s, '70s and '80s for many famed teams such as Ferrari, McLaren, Porsche, Brabham or Lotus. He is the only driver to have won in Formula One, Can-Am, Le Mans, and the Paris-Dakar rally.