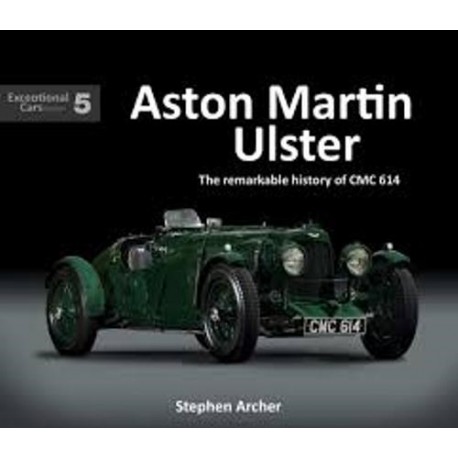 The fifth book in the Exceptional Cars Series
CMC 614 is the registration number of an historic Aston Martin Ulster which has, without doubt, competed in more races than any other Aston. Built in 1935 to the same specification as the factory team cars, it took part in the Le Mans 24 Hour race, the Mille Miglia, and the Tourist Trophy in 1935. Eddie Hall and Count Johnny Lurani were among the celebrated drivers who raced it in its first season. The 1.5 litre Ulster model marked the peak of Aston’s pre-war achievements and marque enthusiasts recognize CMC 614 as one of the finest examples of the 28 made – as well as the most raced Aston of all time.

CMC 614 was built for ER Hall – the man who would later become famous for driving a Bentley single-handed to eighth place at Le Mans – and its first race was the 1935 Mille Miglia, from which it was forced to retire with an oil leak.
For the rest of the 1935 season, it was supported by the Aston Martin works, and run alongside the team cars, finishing eighth overall in the Le Mans 24 Hour race and taking a class win in the 24-hour Targa Abruzzo.
The car was sold to H. Porter Hargreaves in 1936; then, post-war, to R F McNab Meredith who achieved several good results over a 10-year period. But its greatest success came from 1962 with Aston specialist Derrick Edwards, who won more 600 awards in his 30 years of ownership. It continues to be raced in the 21st
Today, CMC 614 is presented as equipped for Le Mans in 1935 and is original in virtually all respects, having been maintained by Ecurie Bertelli, the business which Edwards co-founded with fellow Ulster owner Nick Mason.
The book is lavishly illustrated with a mix of period and contemporary images including a gallery of colour photographs showing the car and all its fascinating details.